New Artist: Michael Peitsch and a sneak peak at my wip..

I am always amazed at what great artist talents I come to know and this now includes Michael Peitsch. Michael has made a donation of one of his existing works title "Undead" to grace the pages of the Red Ash Templates Main Page and also as serves as the image of the Lich, found under the Templates section.

Drop by and take a look and when your done head over to Micheal's Gallery on deviantArt and check out Michael's other works and be amazed!

While I am making this post I will also add a little sneak peak at my work in progress...the combat simulator. 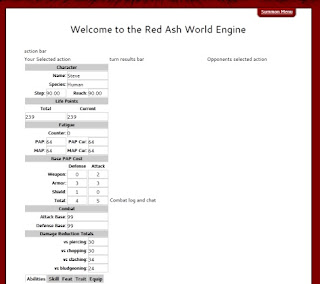 As you can see a lot still needs to be done, but a lot has already been done. The image above is page 4 in a series of pages to make a new character, select equipment, select skills and then enter this page where the combat will be held.

Since I will restrict the initial use, the species is already human, equipment will already be selected and skills are limited to the bare minimum. All values you see in the left hand side will be what the user has access to. Once an opponent enters combat you will see a similar character sheet on the right side. The action bar will be populated with action you can perform based on your current weapon, condition and whether you are the attacker or defender.

Below the action bar is a small block to where you will drag your action. Your opponent will also have a box above their sheet so you can see/know know when they have committed their action. As per the combat rules the character with the higher melee skill can see what the other character is going to do, with ties going to the defender. Once both side have set their action the server will, roll the dice, and display the results in the combat log area. A small chat window will also be found in this general area so opponents can show their good will and sportsmanship.

So why did I design it like so..? Well I will be opening more and more of the system rules to demo in the app. My plan will be to test 2 identical soldiers at first with identical skills and equipment. This will give me an better feel for the balance of the combat rules themselves.

Next I will open up armor and weapon selects and I will also open more melee skills. Then I will add higher levels increasing skill points, abilities scores and more. After that I plan on adding movement, ground based first then air later. Following this will be bringing in arcane, ritual and psyche skill trees to test and tweak spell casters. I am some what concerned that a melee may be two brutal, but we will see and I will make adjustment to the core rules as needed. Next I will add the 5 playable size categories with mixed size matches. And last I will add in the traits and the full species list with all traits enabled. By now you should have a great opportunity to try the Red Ash System out and get a feel for the combat, how the rounds and turns progress and the nuances of the selection of weapons and armor.