Michael Peitsch has been hard at work and gifted more of his work in support of the Red Ash World Engine, a Creative Commons rules set for RPG (Role Playing Game) and Strategy Game. Stop in and take a look at the new art and checkout Michael's gallery on deviant ART.

Of the pieces 4 are weapons and include the claymore, the halberd, the kukri and the scimitar. He also did a very nice great helm. But to be truly impressed check out his piece called "White Horror" which can be found as the image for the zombie, but hurry because I think the zombie caught wind of the elves and will shuffle off after them....braaaains!!!!

All the Best!
Chris J
Posted by Unknown at 6:11 PM 0 comments

Just got done with the chat portion of the combat sim. I logged into the sim using Internet Explorer, Firefox and Chrome to make 3 different characters and send messages to all and also to test sending private messages.

The action bar below the turns is where I will have specific actions displayed that you can perform depending on your current weapon equipped and if you are on your turn (as an attacker) or if you are defending on your opponents turn.

Depending on your melee skill level (not including any melee children skill levels) will determine the reveal order, of the selected actions areas. Lowest melee skill reveals first, a tie always goes to the defender. Once the reveal order is determined that player selects their action during a turn as either an attacker or a defender and they reveal it to their opponent. Then the opponent with the higher melee score can make their selection. Once both selections are made the turn is rolled and results are recorded and displayed in the combat log.

Near the bottom of the chat screen you will also note a button labeled "enter another arena". This is to support more than one combat taking place at once.

The large blank area on the right will populate with your opponents data once a challenger steps up and you accept. From there onward you will be in combat with them until the combat is decided. 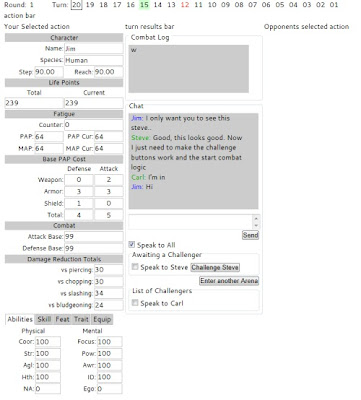 Next up is the logic on the challenge button and to work on the combat and turn logic.
Posted by Unknown at 6:31 AM 0 comments